The End of the Harvest Is Time to Honor the Dead

In October the popular “Halloween” takes place, and another, known as “All Saints Day”, is, also, celebrated.  Both relate to those who are among the deceased and are remembered on those days, and both earn the attention of celebrants throughout the world. 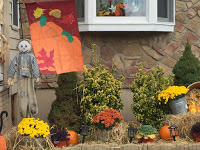 ts without the feast days and then later to honor the Christian dead is celebrated each year in America on October 31st.  It’s become heavily commercialized; the average American family spends between $88 to $100 on Halloween “stuff” including treats for trick or treaters, costumes for the kids, their adult parents, and even the family pet, as well as for outdoor decorations.  In 2016, we collectively spent $7 billion (yes, with a “B”) on these things! Imagine if all that money could be used to help build communities with a focus on gratitude towards our ancestors.

Of course, it didn’t start out that way, the origins of the holiday are humble.  In fact, Halloween began in Ireland, and largely belonged to pranksters, hence the famous call: “Trick or Treat”. Instead of pumpkins as jack o’ lanterns, the Irish carved turnips.  The celebrations crossed the ocean and American pranksters played their version of tricks for about 30 years, costing cities millions of dollars in damage.  At one point many American cities considered banning Halloween altogether, which caused parents to came up with a new custom of costuming their children and sending them door to door to ask for treats with a vague reference to “tricks” if treats were not forthcoming.

Then World War II took place and sugar was rationed, which meant sweets were severely limited, or unavailable. Out of necessity, people created new and inexpensive customs such as apple-bobbing and hosting modest Halloween parties held at home; these became popular ways to mark the day.

The other October event is All Saints’ Day which they say first began in a monastery in France and quickly spread to Christians around Europe and European colonized countries.  Immigrants from Scotland and Ireland brought the holiday to the U.S.  Today it is observed globally in certain faith practices; in U.S. Christian churches it often occurs on the first Sunday after Pentecost in remembrance of deceased members of church congregations.  A candle is lit as each person’s name is spoken, followed by a prayer for each soul.  In the U.S. the congregation might also organize a church supper that evening featuring homemade comfort foods.

In Latino communities, the autumn months of October and early November hold celebrations that link All Saint’s Day and All Soul’s Day (November 2nd) with the Day of the Dead (November 1st).  Symbols associated with these services include a sheaf of wheat, a crown, colorfully dressed skeletal figures, and framed images of various saints who tend to be shown wearing the color white for purity and piousness. Families also gather at the cemetery to honor their dead in a spectacular and moving ritual to behold.

Celebrants enjoy taking part in both types of events in their communities.  There is an overlap between the two occasions because they both serve to connect the spiritual and the physical worlds.  Symbols of Halloween include ghosts, goblins, walking skeletons, black cats and images of witches on broomsticks flying across the night sky.  It is also considered a political charged time to celebrate with masks and dance for those who have fought for independence.  These occasions help mark the single night of the year in which spirits and the dead can cross over into the world of the living. Foods served at October parties can include toffee apples, caramel corn candy shaped like corn niblets, pumpkin pies, cookies, breads and even beer!

“Halloween is just one of many traditions that honor the dead. Death is, of course, a reality of all living beings and human cultures around the world typically ponder on this cycle of life through special observances and traditions. The majority of these traditions focus on remembering lost friends and family members and honoring them for the impact they made in the lives of the living.”

Dia de los Muertos,  or Day of the Dead, is a popular Mexican tradition that celebrates the souls of the dead on November 1st. It is believed that remembering the departed in sadness would upset the souls of loved ones, so instead of mourning, the departed are celebrated with food, drink, music, and dancing; making for a uniquely exuberant celebration of life and death. The dead are celebrated and remembered with Oferendas, which are individual altars and offerings of food.

Araw ng mga Patay, also translated to Day of the Dead and held on November 1st, is a similar tradition in the Philippines in which Filipinos take time to remember passed family and friends by visiting their graves and praying for their souls. After cleaning the tomb of debris and weeds, celebrations are often held around the gravesite of the departed. The dead are included in the celebrations with food offerings and prayers. Many people spend entire days and nights near the burial place of their departed loved-ones until the celebrations are over.

Mahalaya Amavasya (Pitru Paksha), is a tradition in India that also celebrates the dead. The belief is held that the people of the present owe a great deal to people of the past for providing them with the knowledge and tools to continue the cycle of life. The living honor the departed with offerings of food as a way to thank them for their contributions and continue to celebrate through community festivals.

Chuseok or the Harvest Moon Festival is a traditional holiday celebrated in South Korea on the 15th day of the 8th month of the lunar calendar. Though the holiday mainly focuses on the season of good harvest, traditional practices include traveling back to ancestral hometowns and honoring family ancestors. In preparation for the celebrations, the graves of the departed are cleaned and decorated. A special breakfast and memorial service are also held to commemorate the dead and thank family ancestors for their guidance.

Indigenous peoples and cultures all over the world honor their dead ancestors in one way or another. In fact, many indigenous cultures invoke their ancestors daily through ritual. This is because without our ancestors, none of us would exist at all! Our ancestors also hold great wisdom; they each lived and learned before us, and we can call upon our ancestors to guide us with that wisdom.

These types of celebrations are an important part of various – if not all – cultures, as it reminds us of our human connection to the natural cycle of life and death. In our daily life, it is easy to forget and even harder to accept that death is a natural part of life; scientific advances and efforts to contrast natural processes instill in us a fear of death.

On this week, take time to remember the friends and family who have died. Think about how much they have contributed to your life and remind yourself of their role in your life and the community. Celebrate our ancestors who have paved the way for us to be present where we are today, and honor them by being a positive force in your communities.”

Honoring our Ancestors: The True Meaning of Halloween – by Sonny Lawrence D. Alea for Pachamama Alliance

Celebrants may incorporate ceremony and ritual, both serious and also fun-loving to these important celebrations to remind us of our interconnectedness with life and death and all those who came before us.